Know what’s in your water. Get fast & accurate results with our free basic water test.

We will perform a basic test on your water to determine your Total Dissolved Solids, Hardness, and Chlorine content and present you with a professional analysis of the results.

A new study by the Environmental Working Group reports that local drinking water contains hexavalent chromium, a toxic metal that has been linked to cancer. While the U.S. Environmental Protection Agency does not require the testing for the metal, the survey found that levels in the local water in some areas were far beyond the levels proposed as a safety limit by authorities. You can search your zip code to see the amount in your municipal water supply here: https://www.ewg.org/interactive-maps/2016-chromium6-lower-48.php#.WXYljtPyu-l

What it is – hard water contains calcium and magnesium minerals which bond with everything they touch leaving “limescale” in their wake.

Treatment – Our warranteed water softener provides the best option for soft water on the market. It improves the water throughout your entire home while protecting your appliances and fixtures.

What it is – Iron can come in a couple different forms including dissolved and non-dissolved. Both of which can leave red/orange stains on your sinks, tubs, and toilets and can be extremely hard to remove. Iron can also cause bacteria to grow and let off an unpleasant smell.

Treatment – The EcoWater ECR 3502 is rated to remove up to 15 ppm of clear water iron. In most cases, our equipment can remove triple the iron compared to competitive brands. Should your water run red out of the faucet, an ETF AII9 Air Injection filter ahead of your water softener will usually fix the problem. In severe cases, a separate iron filter may be needed.

Water in our area has frequently been positive for lead, cysts, and PFOA/PFOS. These chemicals have been found to exceed the levels set forth by health advisory organizations and may cause health problems.

The chemicals Perfluorooctanoic acid (PFOA), also known as C8, and Perfluorooctane Sulfonic acid (PFOS) are bio-permanent, resistant to direct oxidation, and do not break down naturally in the environment or the human body. Studies suggest that exposure to these chemicals may lead to cancer.

Learn more about our whole home solution that solves all of these issues in one system.

What it is – Chlorine is a chemical used by municipal & local water treatment plants to reduce harmful bacteria in the water supply. While this sounds good, chlorine and chloramines can cause a bacteria of their own to grow called trihalomethanes (TTHM) which is quite unsafe to drink or bathe in.

Treatment – The most efficient Chlorine reduction filter is Granular Activated Carbon (GAC) or Catalytic Carbon. Due to the high level of chlorine added to water by cities, you will really appreciate your water with chlorine reduction.

Arsenic is a common water issue in Michigan, however, it can be easily and affordably removed with an under-sink filter from American Aqua.

According to the CDC, “Arsenic can enter the water supply from natural deposits in the earth or from industrial and agricultural pollution. It is widely believed that naturally occurring arsenic dissolves out of certain rock formations when ground water levels drop significantly. Some industries in the United States release thousands of pounds of arsenic into the environment every year. Once released, arsenic remains in the environment for a long time. Arsenic is removed from the air by rain, snow, and gradual settling. Once on the ground or in surface water, arsenic can slowly enter ground water. High arsenic levels in private wells may come from certain arsenic containing fertilizers used in the past or industrial waste. It may also indicate improper well construction or overuse of chemical fertilizers or herbicides in the past.”

What it is – dirt & sediment is just as it sounds. This is typically most common in well water or surface water that hasn’t gone through a treatment facility.

Treatment – Dirt and sediment are found in almost all water supplies and will decrease the efficiency and lifespan of your appliances. For example, sediment in a water heater can prevent the heat from transferring to the water in the tank once sediment has built up in the bottom.

What they are – common contaminants in our area can include pharmaceuticals, nitrates, TTHM and more. These are not included in the free water test, however, we do offer full laboratory testing at an affordable price. 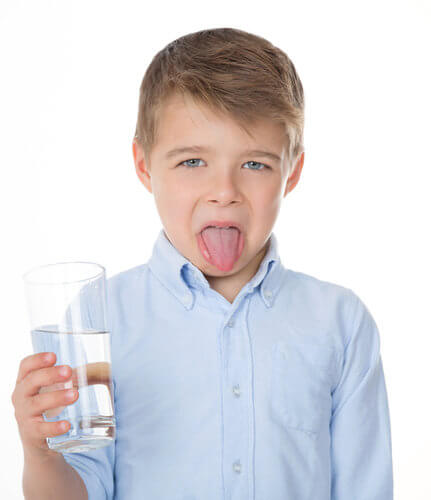